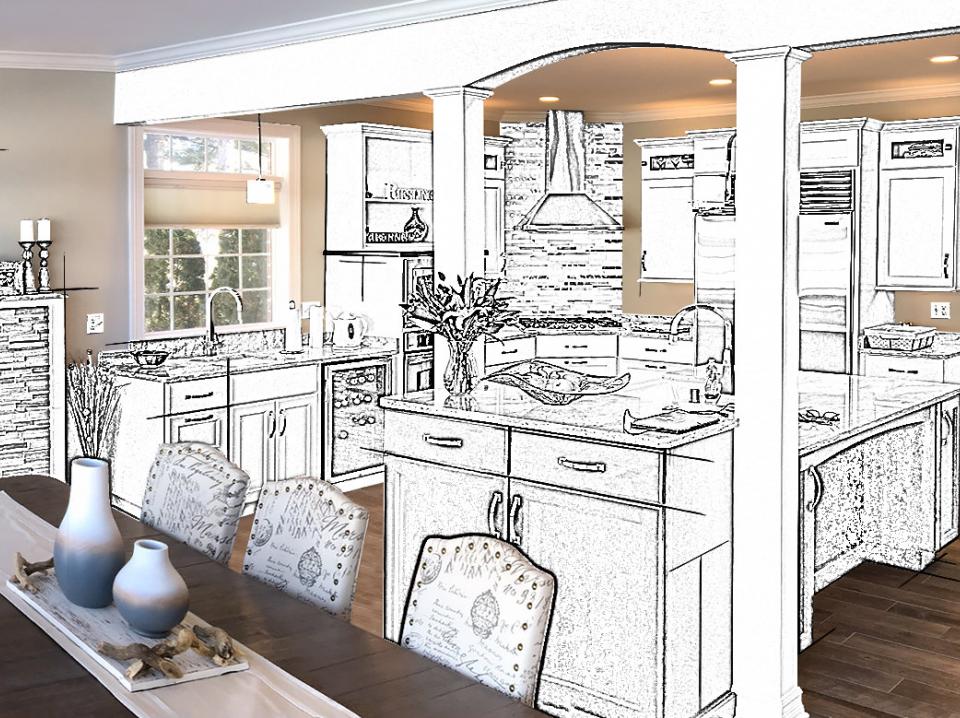 The existing kitchen was very cut off from the home. Our customers desired a new kitchen that flowed better as well as fit with the styling of the home. Other designers weren’t able to offer any insight and weren’t fully in tune with the customers.

Wisconsin Kitchen Mart delivered a stunning kitchen with the combined classic and traditional elements these clients were looking for, even with a few structural roadblocks along the way. 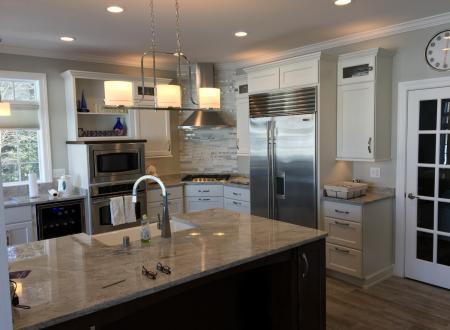 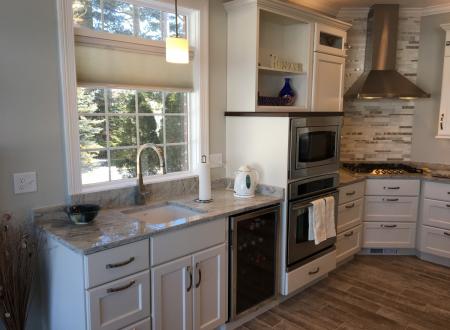 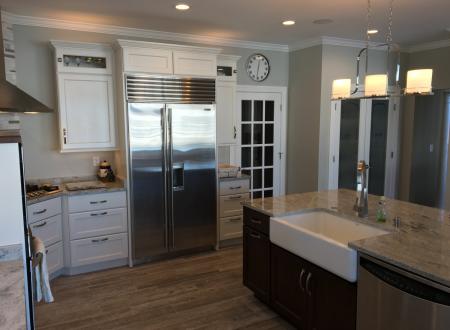 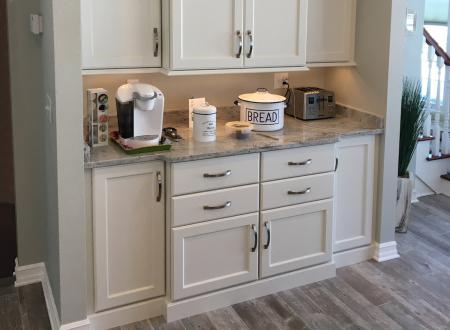 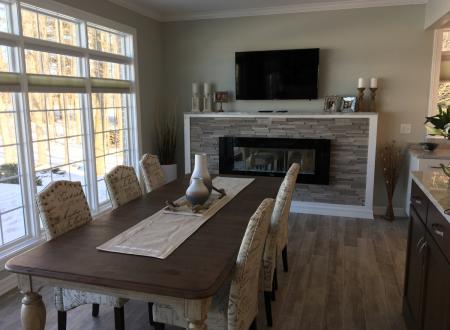 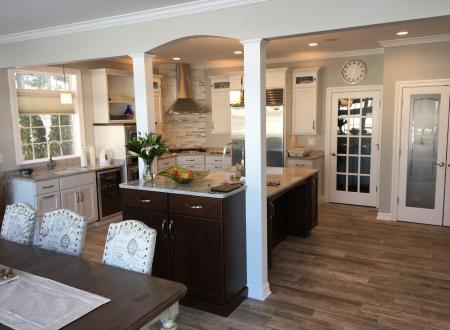 The solution to the dead end header was to create a full header across the entire room with the structural post staying intact, adding another post equidistant from the opposite wall and adding an arched detail to bring in details from the other rooms of the home. The arched theme was expanded into the old closet space to make a cohesive design statement. This all provided a logical break in the space but still kept the open idea and view of the expanse of windows on the back of the home.

The cabinetry selected was Plato’s Prelude Cabinetry. The door style was Revival, full overlay, with a combination of plain and decorative drawer fronts and doors with a recessed panel detail. The perimeter of the kitchen was done in Diamond White paint and the island was selected to be Mocha stain on Alder.

The new appliances are all stainless steel with a new Zephyr chimney style wall hood. Their placement was carefully selected to make cooking as convenient as possible. All other appliances were reused including the Sub Zero side by side refrigerator with ice and water through the door.

To make the kitchen brighter, the wall paint was a warm, soft gray and the trim was painted similar to the cabinetry. The chimney hood has a decorative marble and metallic tile backsplash detail. The flooring, kept from the original kitchen, was a ceramic tile in a distressed wood plank design with warm grays and light wood tones.

The granite countertops are Snowflakes granite with a simple pencil round edge detail. The decorative hardware used on the cabinetry was selected to have a transitional look in brushed satin nickel. 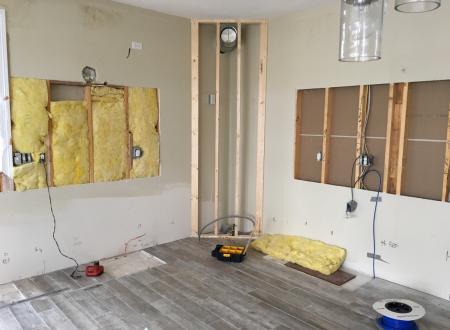 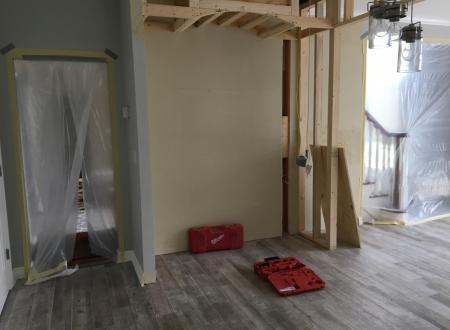 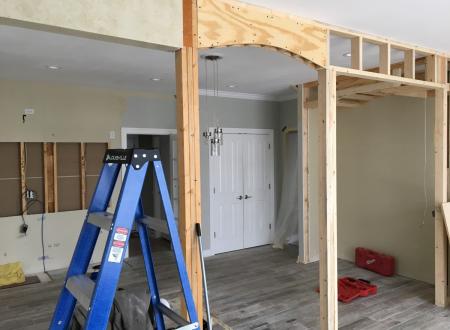 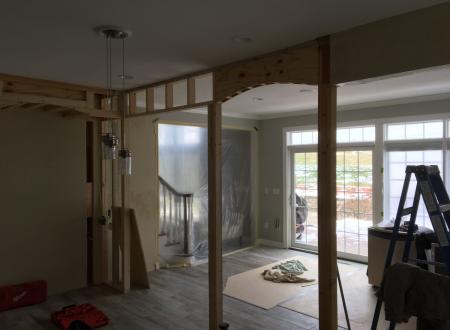 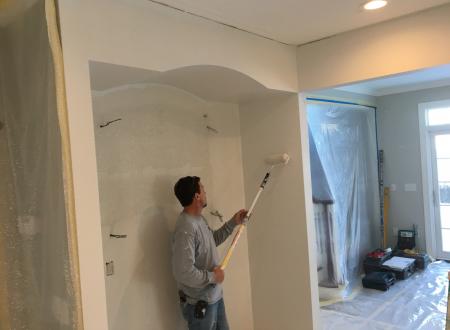 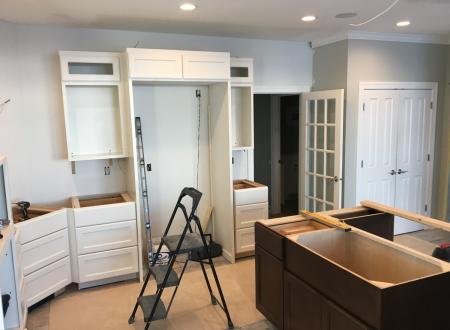 To minimize noise and dust in the home, we covered the entryways into the kitchen with plastic tarps. Our customers could stay in their home without being exposed to construction debris. We clean as we work, keeping the kitchen in immaculate shape throughout the installation process.

The floor had been recently installed before our remodeling began. As a result, we took extra precautions to ensure the floor would not be damaged while moving around appliances. We used cardboard and tarps to keep the floor free from paint, dust, and debris.

The fireplace the customer supplied was designed into a custom mantel surround with stacked stone detailing and a granite cap that also carries the arched detail through in a horizontal plane. As we work, we test new features to ensure they work correctly. As seen in the photo of the newly installed fireplace, we checked the gas connection and how much heat was given off by the flames.

With all our remodeling projects, the timeline is very important for homeowners. We know our customers want their homes back to normal as quickly as possible. We agreed upon a start date of December 5th but were able to start the project early on November 28th. Our contractors finished on January 16th, two weeks ahead of the proposed finish date of February 1st. 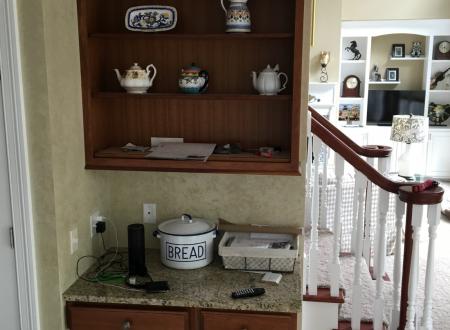 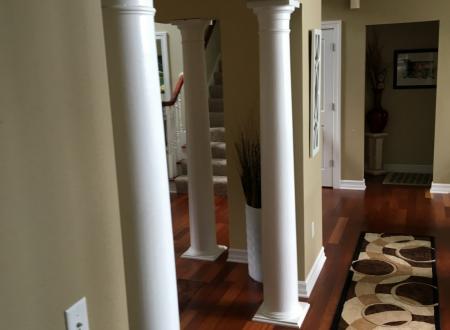 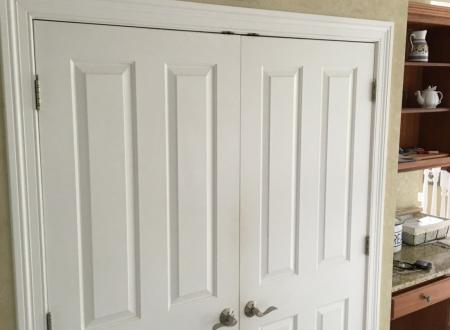 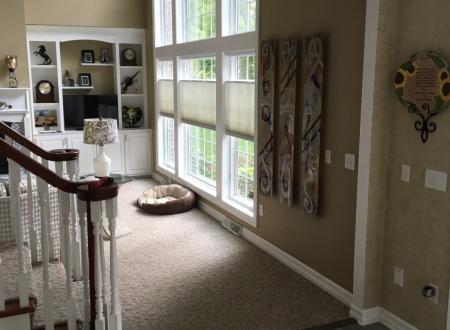 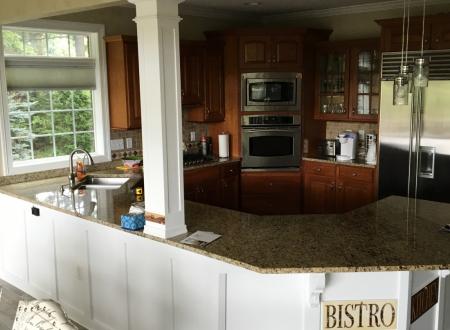 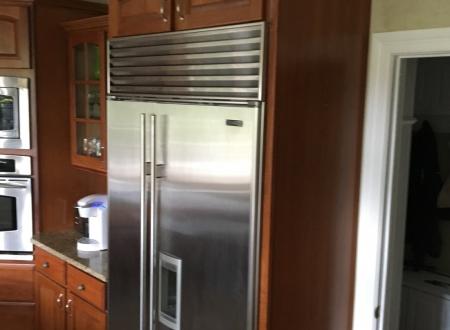 This kitchen was in fairly good shape, it just didn’t match the style the customer wanted for their home. It felt closed off from the rest of the house.

In particular, a post header divided the kitchen. The placement was unusual and separated the kitchen from the dining area. Despite the large square footage available, the entire room felt confined due to this unusual design feature. Unfortunately, the post was structurally necessary for the kitchen and could not be removed.

There were functional problems with the kitchen layout that had to be addressed as well. The microwave in the existing kitchen was up too high for common use since it was stacked above the wall oven.

There were two very large closets within a few feet of each other and there was a planning desk which was largely unused.  Right away in our designs, we decided to re-purpose one closet area for additional cabinetry and counter space, and change the second to a decorative pantry with glass doors to keep the function but improve the look.

For the dining area, the customers wanted to incorporate a new slim fireplace and add an additional television for entertaining.

One of the appliances, an under counter wine refrigerator which was initially planned to be replaced ended up being reused, however, the space designed for the unit is convertible to a larger size should they decide to replace the unit in the future. 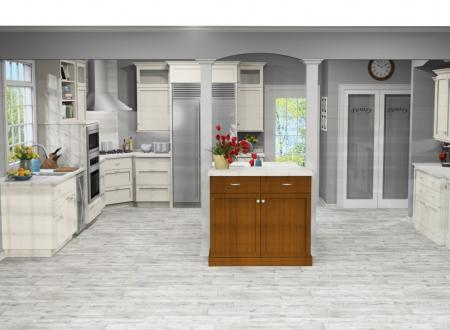 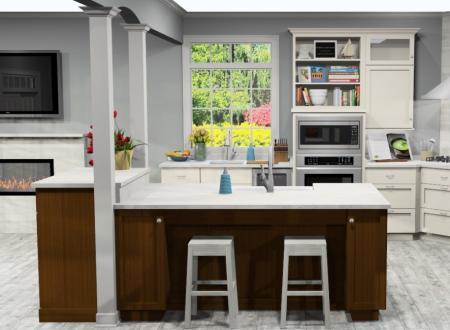 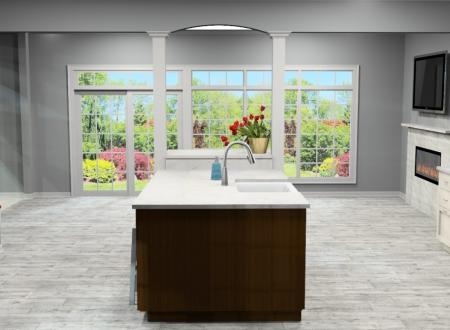 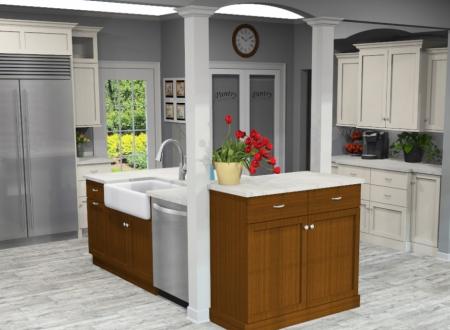 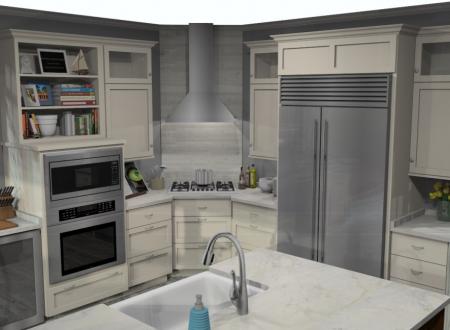 Upon arriving at the home, Rob was struck by an unusual design element: a post and header dead ended in an odd place in the center of the room. It was completely out of place yet structurally necessary. The open, multiple walk way kitchen the customer desired would have to be based around this critical element. Through artistic renderings, Rob was able to show the customers a new vision for the kitchen. They agreed to the design and we presented them with a proposal to begin work after we discussed material options and budget concerns.

Since the customer was going to use all of their current appliances, our renderings took these elements into account. From the large refrigerator to the coffeemaker, each appliance had to have its own place in the new kitchen design.

The flooring in the kitchen and dining room was brand new. As a result, we took the color and texture of the floor into account when selecting the colors and styles of the rest of the room.

Decorative elements like flowers provide a sense of scale for the kitchen. All of our renderings incorporate existing elements of the home to make it easy for homeowners to picture the dimensions of their new kitchen. In these renderings, you will frequently see the stairway, doors, and central pillar as reference points.